The Phoenix Project is a business novel that provides a fictional use case for the adoption of DevOps methodologies. Each of the main characters in the book plays an important role in advancing the book's plot. Through their actions, the characters help the reader understand why it's important to understand the Three Types of Work, break down departmental silos and use the Three Ways principles to change corporate culture.

The Phoenix Project is written by Gene Kim, George Spafford and Kevin Behr. (Check out a free chapter excerpt here.) 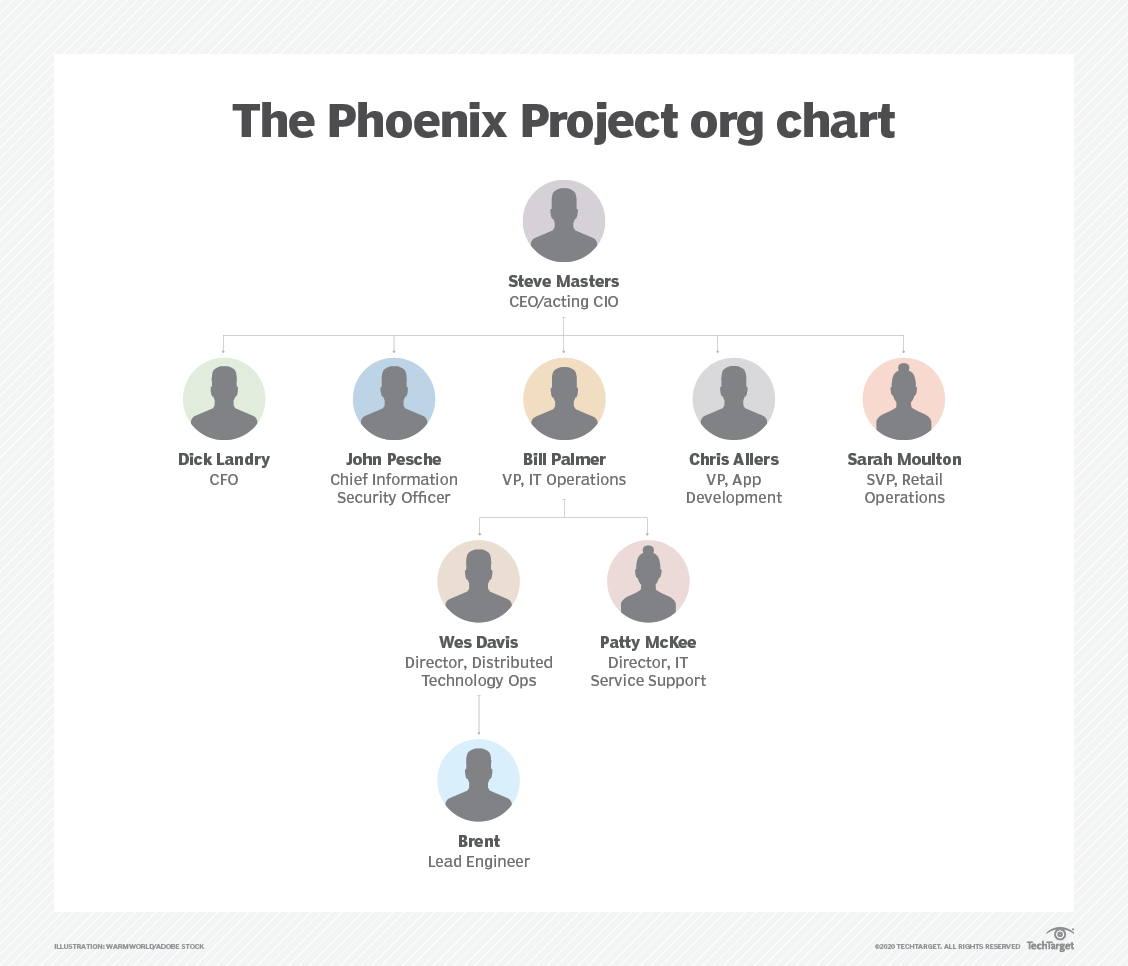 To help you get to know the main characters, we've provided quotes from the book that we think will help you quickly grasp each character's personality and point of view (POV).

About Bill: Protagonist Bill Palmer is the new VP of information technology at Parts Unlimited. Under Erik's mentorship, he uses his teamwork and interpersonal skills to improve collaboration between IT operations and development.

Quotes from or about Bill:

About Steve: Parts Unlimited CEO Steve Masters is a persuasive leader and must get his company to perform by any means possible to keep it afloat.

Quotes from or about Steve:

About Dick: Dick is gruff, brusque and one of Bill's more vocal critics until the end of the novel. His idea of a good day is "beating the pants off the competition" and writing excessive commission checks to the sales team. A bad day for him is when the organization is getting their pants beaten off.

Quotes from or about Dick:

About Wes: Wes is impatient, combative and outspoken. Though blunt and often abrasive, Bill learns he can rely on Wes as a trustworthy ally.

Quotes from or about Wes:

About Patty: Patty initially ran a complicated change management system that no one wanted to use. With her attention to detail and organizational skills, Patty builds a more efficient and collaborative change management process that gets things done without excessive delays and conflicts.

Quotes from or about Patty:

About Brent: Brent is the most knowledgeable engineer at Parts Unlimited. He has a monopoly on knowledge of the company's IT systems and therefore must be present for anything to get done.

Quotes from or about Brent:

About Sarah: Sarah, the main antagonist, is Steve's right-hand person and has ambitions to replace him as the next CEO. She has a competitive streak and will not hesitate to break the rules to get what she wants. She has a reputation within Parts Unlimited for being difficult to work with.

Quotes from or about Sarah:

About Chris: Chris has a reputation as a "capable and no-nonsense manager."  Bill's IT operations team initially is in conflict with Chris's development team, who they blame for being late and delivering low-quality code.

Quotes from or about Chris:

About John: Often seen with his black three-ring binder, no other character embodies the transformation of Parts Unlimited as much as John. For years, John's rigid attempts to improve security led to him being intentionally excluded from meetings by his colleagues. After being harshly criticized by Erik, a board candidate who becomes Bill’s mentor, John rebuilds himself and becomes an important piece of the company's success.

Quotes from or about John:

About Erik: Mysterious tech hotshot, Erik is the quintessential odd genius. Perhaps wired a bit different than others, he is presented as an omniscient mentor figure. He appears to have studied Lean and Agile principles, which he speaks about with a scholarly air, and uses his knowledge to guide Bill's thinking.

Quotes from or about Erik:

Ethereum is an open source, distributed software platform based on blockchain technology.